Gianni Frasi is an artisan torrefacteur (coffee roaster) and producer of fine dried peppers. His coffee is served in many of the best restaurants in Italy. 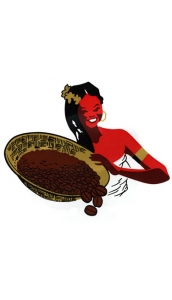 Pierre met Gianni while living in Modena, and Racines is the only place in France to sell both his coffee and his pepper.

Frasi works in the tradition of his uncle, Giovanni Erbisti, who began roasting coffee in his Veronese apartment in 1947.

He still uses his Erbisti's original roasting machine, making him almost certainly the last torrefacteurs in the world to roast his beans directly with an open flame.

The family philosophy remains the same, eschewing dark roasts in order to preserve even the subtlest aromas of the coffee.

Gianni is obsessive about sourcing his beans and insists on specifying the exact means of production at every stage of the process.

Even the vintage espresso machine in the corner of Pierre's restaurant is sourced and installed by Gianni.

More recently, the Frasi family has been using its expertise in sourcing and roasting coffee to produce some the world's finest dried peppers.

The pepper is produced to the same exacting standards, with the same insistence on traditional, hands-on methods, and sold under the label Maricha.

The Parmigiano Reggiano of Giorgio Bonati